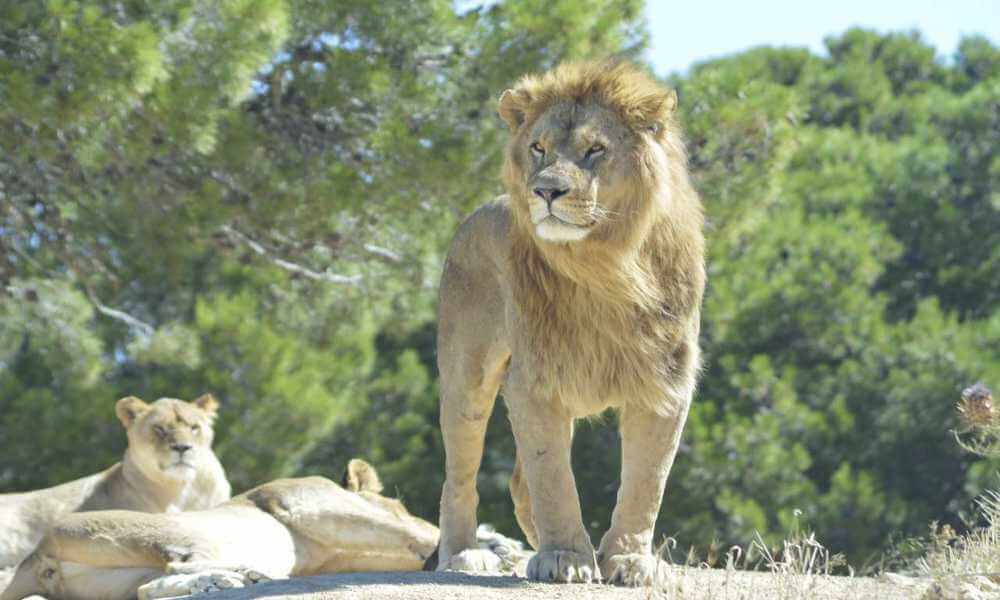 Making a safari in South Africa has been one of the best experiences of my life. I thought that my safari to Kenya and Tanzania would be difficult to overcome, but my trip to South Africa made me realize that I still have a lot to discover.

And due to this, you’ll find some of the best safari parks in South Africa in all of the African continent. But which ones are the best?

In this post, I am also going to tell you about the five top-rated safari parks in South Africa where you can do safaris. Read on!

In this Park, you can see the big five (African elephant, black and white rhinos, buffalo, lion, and leopard), as well as many other animals. In fact, one of the things that surprised me the most when I was there is the large number of elephants, which is posing a problem for them because there are already more than the Park can handle, and they are sterilizing them.

It is also the corner of the world with the most rhinos. Specifically, there are 5,000 white rhinos and 350 black rhinos, which represent 80% of the world population of this endangered species.

Anyway, I also want to say that no one ever guarantees you when you go on an excursion that you will see them. In the end, we are talking about a very large area where these animals live in freedom, so not all of them are always seen.

I recommend visiting this Park during the dry season because that’s when it will be easier to sport them. The reason was explained to me by the guide, and it made all the sense: animals tend to go to water sources, so by getting closer to them, you have more animals to enjoy.

Another of the best safari parks in South Africa that can be very interesting to visit is Addo Elephant Park. This Park, much smaller than Kruger, is in the southern area, very close to the city of Port Elizabeth.

It is one of the favorite places for elephant lovers. I did not get to go because I preferred to see Cape Town, but all my friends who have gone have been delighted.

This Park was created in 1931 to give a home to the 11 elephants that remained in the area. It was a success, and today there are already 450 African elephants living in Addo. Of course, you can also see the Big Five.

If you want to see this area, I recommend that you do a safari through the Park, it is also the area of ​​the penguins, and you can see southern whales and white sharks on the coast. In fact, there are several islands that belong to the Park and that you can see if you can go on a boat excursion.

Of course, you don’t expect me not to tell you about the Kgalagadi Transfrontier Park in this post about the best safaris in South Africa. It is the second-largest in the country, after the Kruger, and is located on the border with Namibia and Botswana, with which it shares part of the territory. The Botswana area is twice the size of South Africa and is called Gemsbok National Park.

I recommend that you travel it in 4 × 4, although there are also walking tours that may interest you if you are in good physical shape.

The truth is that doing a photographic safari in South Africa is one of the best options. The landscapes are perfect for taking spectacular photos of giraffes, antelopes, lions, and all the animals that live in the Park.

It should be noted that in Kgalagadi, there are no rhinos, buffaloes, or elephants, so of the Big Five, you can only see lions, which are quite common, and the occasional leopard, less common. In addition, it is also an area for cheetahs, hyenas, and wildebeest.

With 332,000 hectares, it is another of the best safari parks in South Africa. It has the third-largest area after Kruger Park and the Kgalagadi.

The iSimangaliso Wetland Park is a very interesting safari area as it is a wetland that includes the coast and also part of the marine environment. This Park goes from the Mozambique border to the south, on the east coast of the country, being quite close to the city of Durban.

The most famous of this Park are the hippos, since it is the Park with the most hippos in all of Africa, but they also have elephants, leopards, flamingos, and all kinds of birds and mammals.

Special mention is the marine area if you like whales, dolphins, and sharks as much as I do. In fact, iSimangaliso (yes, it’s written like that with a capital S, don’t ask me why) is the only place in the world where you can see sharks, hippos, and crocodiles. In addition, there are a lot of species of dolphins and whales. In total, 32 different species.

Well, I also have to tell you about its coral reefs with 53 different types and the leatherback and hawksbill turtles that nest on its shores. In total, there are five different ecosystems of such value that it is a UNESCO World Heritage Site.

It is not the most common in South African safaris, but it has an important contrast; you can see not only some animals of the Big Five, but also other reptiles, birds, monkeys, and marine mammals. I am clear that it will be my next safari destination in South Africa.

Located in the north of South Africa, Entabeni is another of the reserves that I was able to go to, and I found it wonderful. It is only about three hours from Johannesburg airport and slightly less from Pretoria, the country’s capital, making it a good first stop.

In this reserve, you can see the big five and also other animals such as giraffes, hippos, antelopes, wild boars, and many species of birds.

What you do have to keep in mind is that in winter, the temperatures sometimes get below zero, so wearing a jacket will not hurt you.

How to organize a safari in South Africa?

Generally speaking, there are four alternatives for organizing a tour through the South African savannah. Next, we’ll explore each of them.

Option 1: Rent a car and enter the national Park

In this case, you only pay the park conservation fee (and the car rental, of course). Rates vary on private reservations, but in Kruger National Park, the cost per person per day is R372, something around $25.

Going on safari in South Africa on your own has the most affordable cost as the main advantage. Another benefit is not having to share the car with anyone and being able to decide when the safari will start and end, always respecting the closing times of the park gates. If you want to spend hours just watching a lion, you can, as the choices are yours and the people who accompany you on this journey.

To do this, all you have to do is rent a car, go to one of the Park’s entrance gates, pay the conservation fee and have fun. A reminder: never run, never open windows and always respect the animals.

Option 2: Hire companies located in the vicinity of the parks and pay for the one-day safari

In this case, you go with a guide and other tourists in the same car to look for the animals. The advantage of hiring a professional guide is that, as they have the day-to-day experience of the safari, the chances of encountering different animals are greater. Remember that finding wildlife on safari is never guaranteed. So the more you can increase your chances, the better.

Option 3: Staying in lodges within parks or private reserves

That’s what I did. In this case, safaris are already included in the daily rate. These lodges usually offer, in addition to accommodation and two safaris per day, all food, breakfast, lunch, and dinner. In this option, although the tourist can also share the car with other people staying at the lodges, it is more exclusive (on my safaris it was just me, my friend and two other people all the time).

The experience of staying inside a reserve and enjoying everything the lodge has to offer is to be kept for a lifetime. And it is important to mention that there are lodges within the reserves that have a very affordable price for everything they offer (accommodation, food, and two safaris per day, apart from the perks).

I personally enjoyed my safari in South Africa, and you too can have fun. However, I have to tell you that the various safari parks in South Africa are at risk of malaria. Although it is not mandatory, I always recommend getting the vaccine before going, especially if you go in the wet season. Also, to avoid mosquito bites, I always prefer to wear long sleeves. A thin cotton t-shirt will protect you from mosquitoes. Of course, mosquito repellent is mandatory. Make sure to spray yourself completely and not leave any part of your body free without repellent.