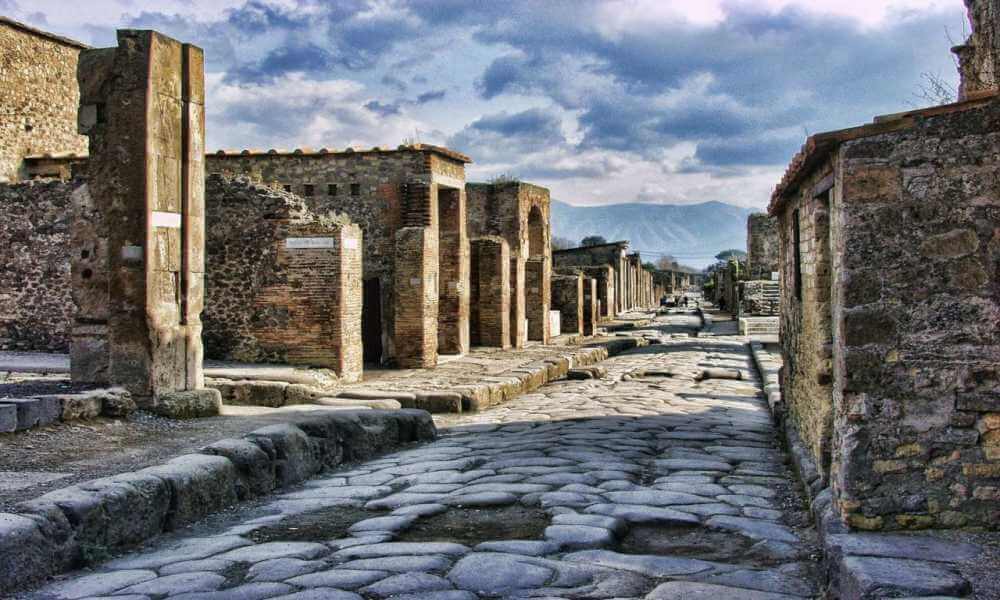 And this makes it, together with the nearby ruins of Herculaneum, a unique example on a planetary scale. It’s as if Pompeii had been frozen in time, forgotten beneath the ashes, until the moment when chance and later archaeological excavations brought it back to the surface.

Thus, as part of my Campania travel itinerary, I went to visit Pompeii with the aim of getting to know this history better and seeing up close the ancient and thriving city of Pompeii. And I can confirm it’s a special place and there are many things to do in Pompeii. In this post, I share my experience on the 12 top-rated things to do in Pompeii and many practical tips to make the most of your visit. Read on!

Things to Do in Pompeii

The Basilica was the most sumptuous building in the Forum of Pompeii, and its space was used for conducting business and administering justice. Dating back to 130-120 BC, it is one of the oldest examples of this type of construction in the entire Roman world. It was the first building I visited in Pompeii.

Its interior is divided into three naves, with two rows of imposing columns. Apparently, the walls were richly decorated with stucco, simulating large blocks of marble.

The Civil Forum was the nucleus of daily life in Pompeii. The epicenter of the main public buildings for the city’s administration and justice, business administration, and commercial activities, including markets and the main places of worship.

The Forum Square underwent several changes over time, having been significantly modified between the 3rd and 2nd centuries BC when the square was surrounded by porticoes, and the back was paved with tuff slabs. The axis of the Forum of Pompeii became the facade of the Temple of Jupiter, aligned with Mount Vesuvius.

The next place on my list of things to do in Pompeii was the antiquarium museum. This is a museum in Pompeii, which provides visitors with information about what the city was like before it was destroyed. Many of these features are replicated into the building to give you an accurate depiction of what life would have been like at that time. The most recognizable area inside this ancient structure is the garden and pond complex which replicates first century Rome’s design aesthetics.

In addition to providing interest viewing opportunities such as three-dimensional maps detailing what could have happened if Vesuvius had not erupted, there is also an interactive section where visitors are able to recreate what life was like in a Roman household. In addition, you’ll see some original artifacts found at Pompeii, such as cauldrons, cooking pottery, amphorae, mosaics, frescos, etc.

The Antiquarium is a museum that has so much to explore and learn about. It also provides an enjoyable experience for the whole family by creating an atmosphere of recreation rather than information overload. I recommend this place because there’s something here for everyone.

I continued my walk to the house of the vettii. The entrance is a large arch with an inscription that translates ‘the House of Amarantus, son of Vettius.’

The interior decoration is what you might expect for this type of wealthy residents. There are frescoes on the walls and ceilings depicting gods in colorful clothing who are playing music or driving chariots. What I found most interesting about these frescoes was how they conveyed stories from Greek mythology: King Midas’ hunger for gold and his donkey ears were represented here alongside Hercules fighting against Cerberus.

The inside also features what must have been an elegant garden courtyard surrounded by columns. Even if you’re not interested in history or architecture or myths, this home offers such a unique experience that it makes my top attractions list for what to do in Pompeii!

5. House of the Tragic Poet

One of the most famous private houses in Pompeii, the House of the Tragic Poet, stands out for the mosaic placed at the entrance that reads “CAVE CANEM” (“beware of the dog”).

Unfortunately, it was not possible to enter the house. The living room decor reportedly included large mythological paintings depicting episodes from the Iliad. Even the mosaic at the entrance is protected by a glass that, given the light conditions at the time of my visit, did not allow me to look carefully (or photograph).

My next stop was the House of Menander. It’s one of the most important Pompeii attractions because it contains what is believed to be a baker, butcher, and furnisher shop all under one roof. I enjoyed the incredible views of what is believed were once shops with counters where customers could go and buy what they wanted.

It was interesting to see how people went about their daily business without any modern conveniences we take for granted today, like electricity or running water. And I found myself wondering what my life would’ve looked like if I lived here two thousand years ago!

The day was already long, but I still wanted to visit the Pompeii Amphitheater, believed to be the oldest known Roman amphitheater. It is a building of generous proportions, capable of housing 20,000 spectators inside.

Despite the importance of the amphitheater for the city of Pompeii, I confess that I was much more impressed with its exterior than with the arena itself. Perhaps by closing my eyes, it would be possible to visualize the gladiators of yesteryear and the ecstatic crowd, but I was so tired that by now, I only thought of sheltering from the heat.

It was the perfect excuse to see a very interesting exhibition about the construction of the building installed in the freshest bowels of the amphitheater.

The House of the Faun was a large house with what seems to be an atrium. It dates back to Pompeii’s Golden Age in the first century and is one of the most visited sites in this ancient city. The entrance has two columns on either side holding up what used to be a porch roofing.

Inside there are many frescoes depicting what life would have been like during that time, including gardens, theater masks, animals such as peacocks and other birds from Africa which were imported for their feathers, people playing musical instruments (like harps), pictures of unique buildings found only in Pompeii and much more.

One thing that is unique about the House of the Faun is what remains from a garden in what would have been its atrium. In this ancient times, before air-conditioning or even electricity for that matter, people needed to find ways to keep cool, and one way was with water. They had pools they could swim in, but it’s believed there were also statues they used as fountains where cold water came out.

The House of the Faun has been well preserved and is worth a visit for anyone traveling near Pompeii.

9. The Agonizing Figures of the House of Fugitives

Cities tend to have criminals. Ancient Rome has them. Similarly, Pompeii isn’t exempt from this fact. Now that we established this idea, a new question arises: What happened to Pompeii’s criminals during the eruption of Mount Vesuvius?

I only have one answer. Go to the House of Fugitives, and you’ll see their sorry states. The House of Fugitives is not actually a house. It was more like a prison for Pompeii’s criminals. During the eruption, everyone was busy fighting for dear life that no one thought about setting the criminals free so that they could live.

There are 13 bodies of statues-turned human bodies in the House of Fugitives. All are lying down but showing signs of struggle as their breathing started to fail due to the ash from Mount Vesuvius. I didn’t look at the bodies for long because I feared that a curse might be lurking with them.

This is another attraction that you should include on your list of things to do in Pompeii. Housed in a building with two floors, the brothel is one of the business buildings mandatory in Pompeii.

As for the upper floor, referring to the rooms of the brothel owner, it was not open to the public.

The temple of Apollo is one of the most popular attractions in Pompeii. It was a sanctuary to god Apollo due to what archaeologists believe may have been an association with healing springs that were found nearby. The temple has many interesting features, including niches where statues would be placed and a decorative frieze on the wall which depicts scenes from Greek mythology.

The columns at the site really illustrate what architecture looked like during this time period. They are Doric-style columns made out of stone instead of marble or other more fragile materials that were often seen elsewhere around Italy in Roman times.

Other notable structures include what appears to be an altar and statue for Demeter as well as what might have been dedicated to goddess Ceres (the same deity who was worshipped in what is now the town of Cerea).

The temple of Apollo would have been a sacred place for healing. This establishment provided patients with food and shelter as well as medical attention from physicians.

I had visited what I thought would be my last site before leaving Pompeii when I stumbled across what looked like an entrance to an underground tunnel. As luck would have it, what turned out to be a walled courtyard with two entrances leading into one of Pompeii’s best-preserved buildings: The Stabian Baths complex. It took some time for me to orient myself within what felt like another world. Much larger than any other building I had seen this far, yet at the same time decidedly less imposing (though what is imposing in a place of death?).

I passed through what could only be the frigidarium, where visitors would have bathed or cooled down. The room was paved with what looked like marble, as well as some bricks and stones that were used to create benches where people might rest before continuing into other parts of this momentous building.

Here I found myself moving from one world into another. The best-preserved rooms were those at the furthest end of the Stabian Baths complex. These sunken rooms reminded me that it’s what we don’t see that often comprises the most compelling evidence of what life was like in Pompeii. And it’s not just what is seen but what is heard because I had to remember to speak quietly as if someone might have been living there still.

It felt surreal and a little creepy at times. But this doesn’t stop me from recommending the Stabian Baths complex for its well-preserved rooms and beautiful mosaics! It should definitely be on your list of things to do in Pompeii.

What you’ll find at Pompeii is what draws tourists from all over the world. From what I’ve seen, it’s worth a visit. The above Pompeii attractions are just a few of what you’ll find in Pompeii.

Note: Some houses and other attractions in Pompeii have hours that do not coincide with the park’s hours. They open later or close earlier. That is, there may be houses that open later in the morning and others that close at 4:00 pm or 5:00 pm, although the complex is open until 7:30 pm. In any case, it is one of those important details to take into account, especially if you intend to visit a specific attraction in Pompeii.